Well, Governor Andrew Cuomo got his wish. New York City and the Great State of New York have now been turned into a modern day Sodom and Gomorrah.  The homosexual activists, who have stolen the rainbow, God's sign that He will never destroy the world by a flood again, as their symbol, now have the 3rd largest state in the Union on-board with their "sodomy = the conjugal act between husband and wife" agenda approved.

Pride was the devil's great sin, and the homosexual activists have also stolen that from the devil, boldly strutting around with "Gay Pride" signs.  There is nothing gay about homosexual sex, which needs condoms to prevent the spread of HIV and other venereal diseases.   If it's so wonderful, then how come disease is so easily spread by it? Of course we have to love the homosexuals as creatures of God, the same as us, but we certainly DON'T have to agree with their agenda.

I remember when New York City proudly displayed so-called "artwork" of the Blessed Virgin Mary with feces and female body parts around her.  I didn't think that it was wise for the city to fund that and "Piss Christ", a crucifix in urine "art".  Well, when 9/11 happened, I thought - I hope they're happy. Now they've gone and mocked God's word again, this time even worse, with the sin of Sodom and Gomorrah now being "the law of the land".  May God have mercy on us, because thanks to politicians like Andrew Cuomo, we are no longer "One nation under God", but rather, "One nation under Man." 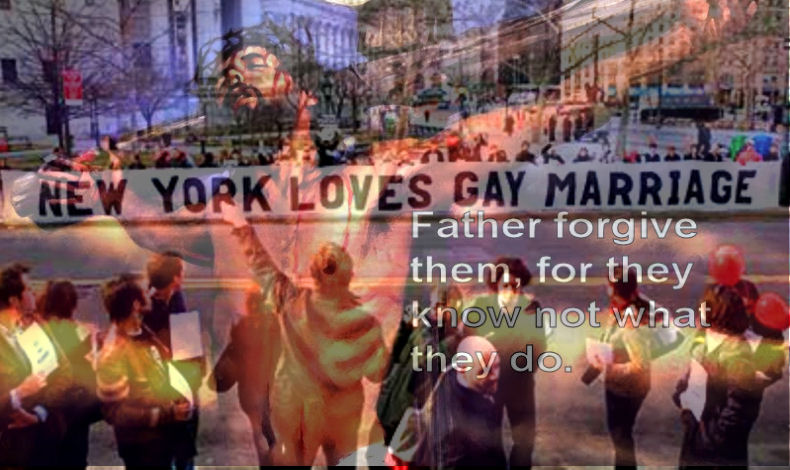